It’s been 24 years since Mariah Carey released the popular holiday hit “All I Want for Christmas Is You”. But all these years later, it’s still so popular it set a new one-day streaming record on Spotify on Christmas Eve. The 1994 song was played on Spotify over 10 million times. The song hit a new high this year when it hit number 6 on the Billboard charts. Mariah Carey thanked her fans on social media, writing on Instagram that setting the record is “such an amazing Christmas gift.” 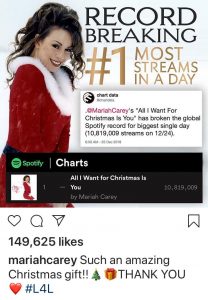