FIVE PEOPLE SENT TO HOSPITAL AFTER HIT AND RUN IN MISSISSAUGA 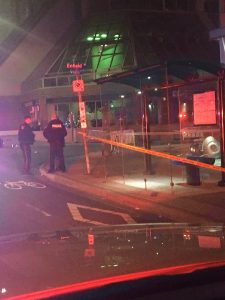 Six people were injured after they were struck by a vehicle outside of a nightclub in Mississauga early Sunday morning.

Peel Region Paramedics were called to the scene of Enfield Place and Kariya Drive shortly before 3:00am and found 6 people suffering from injuries, one with serious injuries.

Peel Regional Police say two groups of people were involved in an altercation at the &Company Resto Bar near Burnhamthorpe Road West and Hurontario Streeet.  That’s when one man got inside his vehicle and proceeded to drive onto the sidewalk and into a crowd of people.

Investigators say they are looking for a lone male suspect described as a black man.  He was driving a dark-coloured Acura with no front licence plate.