Merriam-Webster’s word of the year for 2018 is justice. 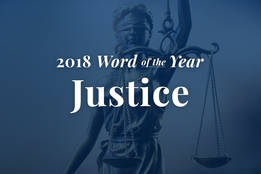 The publishing company’s editor says the word justice consistently appeared in hundreds of searches through 2018 soon after Michael Cohen was sentenced to three years in prison for crimes connected to payment of hush money to conceal U-S President Donald Trump’s alleged affairs. The dictionary’s word of the year follows the Oxford Dictionaries choice of “toxic” and Dictionary.com’s pick of “misinformation.”