The acting Ontario Provincial Police commissioner is asking the courts to order the ombudsman to investigate the recent appointment of his successor.

Brad Blair has applied to Divisional Court to force an investigation into the hiring of Ron Taverner as the new OPP commissioner. 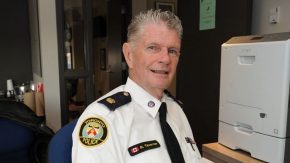 The acting commissioner says the ombudsman turned down a request to probe allegations of political interference from the premier’s office in the hiring process.

Blair also asked the province’s attorney general and the minister of community safety to postpone Taverner’s appointment until an investigation can take place.

Now Blair wants Divisional Court to determine if the ombudsman has jurisdiction to investigate the hiring.

Premier Doug Ford’s office did not immediately respond to a request for comment.