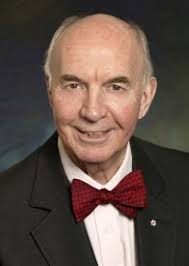 The family of former Liberal politician and cabinet minister Donald Macdonald says he passed away today.

His daughter Sonja says he passed away in his sleep at his Toronto home.

She says her father will be remembered for being a “great Canadian” who was committed to building his country.

Macdonald, who was born in Ottawa, was elected to the House of Commons in 1962 and was a cabinet minister under Pierre Trudeau.

In the early ’80s he was appointed the chairman of the Royal Commission on the Economic Union and Development Prospects for Canada, where he endorsed free trade with the U.S.

(Above photo courtesy of University of Toronto)