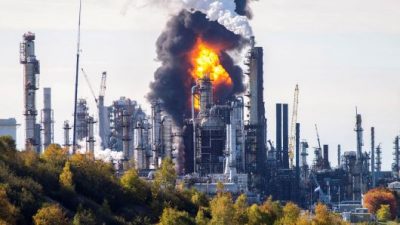 Canada’s largest oil refinery is coming back online following a massive explosion at the site Monday morning. Residents in the area have been warned of possible “flare-ups” as the facility re-stabilizes. Irving Oil in Saint John, New Brunswick is capable of producing 300,000 barrels of oil per day. Company spokesperson Kevin Scott says they’re trying to lessen the impact the shut down will have on consumers, amid speculation if could affect the price at the pumps. No one was injured in the weekend fire. Officials still don’t know what caused the explosion. There were as many as 3,000 workers on the refinery Monday, but most of the facility had been shut down for maintenance when the blast rocked the neighbourhood shortly after 10 a-m, sending flames and black smoke into the sky but causing only minor injuries.