THE 'WHO DONE IT' SAGA CONTINUES IN WASHINGTON

Washington is consumed by a wild guessing game as to the identity of the author of an op-ed piece in the New York Times. The writer claims to be part of a resistance working within the White House to thwart President Donald Trump’s most dangerous impulses. Meantime, the list of those denying writing the article is growing. Vice-President Mike Pence, Secretary of State Mike Pompeo and National Intelligence Director Dan Coats have all said they didn’t write it. An enraged Trump is suggesting the searing piece is an act of treason. He’s demanding that the author be turned over to the government. On twitter, the President tweeted out one word early Thursday. 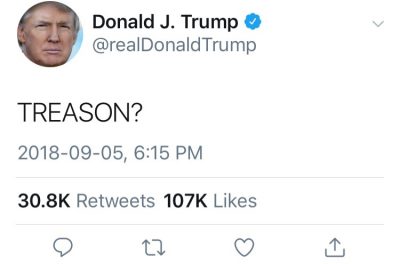