A massive fire at a 200-year-old museum in Rio de Janeiro late Sunday has destroyed artifacts from Egypt, Greco-Roman art and some of the first fossils found in Brazil. 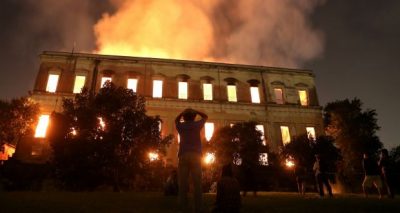 No injuries reported but 200 years of work, investigation and knowledge are lost. It wasn’t immediately clear how the fire began in Brazil’s esteemed National Museum.  A fire department spokesman said 80 firefighters battled the blaze.