The 140th edition of the CNE has opened in Toronto amid a labour dispute involving hundreds of workers. 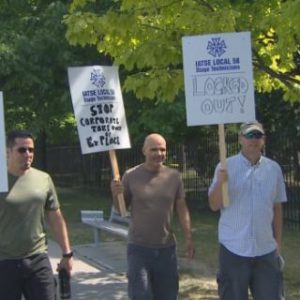 Visitors were greeted by picket lines as the annual event that runs for two weeks got underway. About 400 unionized workers  were locked out by the CNE’s board of governors on July 20, after months of bargaining. The board has said it wants to update the workers’ contract to reflect the highly competitive  marketplace and that it thinks the dispute should be settled at the bargaining table rather than in arbitration like the union has suggested. At the opening of the CNE this morning, Mayor John Tory said he’s hoping for a quick end to the strike, amid yells of  “shame Tory.”  The union has said the board refuses to bargain in good faith and that its workers will continue to picket through the duration of the CNE if the dispute isn’t resolved. Visitors are encouraged to take public transit to the ‘Ex.