OTTAWA WEIGHS IN ON MASS SHOOTING IN TORONTO

Public Safety Minister Ralph Goodale  says the 29-year-old suspect in Sunday night’s massacre was NOT on any national security-related federal watch lists. Goodale also said today that even before Sunday’s mass shooting in Toronto, the government was looking at tightening handgun laws. But he warns making changes to the Criminal Code would be a complicated process. It’s not clear how a man described as having long-term mental health issues obtained a handgun. His family quickly released a statement yesterday outlining the mental health issues of Faisal Hussain. Neighbours say he’s not the troubled man his family claims. Hussain was found dead in the city’s east end after exchanging gun fire with police and a post mortem is being done today.  Meantime, Malvern Collegiate, where victim Reese Fallin graduated in the spring, opened its doors for counselling today and will again in the fall.  Makeshift memorials continue to grow in the area as the Greektown neighbourhood re-opened this morning. A candlelight vigil will be held Wednesday night starting at 7. 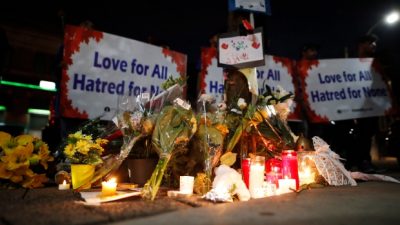