NO LOVE FOR DONALD TRUMP IN BRITAIN

U-S President Donald Trump is drawing large crowds in Britain today, but for the wrong reasons. Thousands are gathering in London for a huge anti Trump protest beneath a giant balloon depicting trump as screaming orange baby, attached to a phone for texting. 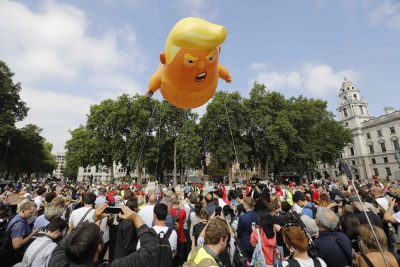 In an interview with The Sun newspaper in advance of today’s huge demonstration, Trump slammed British Prime Minister Theresa May’s plans for Brexit and praised her political rival Boris Johnson. He also criticized immigration and said London’s Mayor had failed to stop terrorism.The U-S president and his wife will have tea with the Queen today at Windsor Castle.