The world is watching the cave rescue effort in northern Thailand. The first mission is complete but it’s now on pause for up to 20 hours to give the expert team a break and replenish oxygen supplies before they re-enter the cave. The official leading the operation says the four children removed first were the healthiest and that the rescue is going better than expected. The rescue began early this morning with expert divers entering the sprawling complex for the complicated and dangerous mission. The boys, who can’t swim and not familiar with scuba gear, apparently traveled underground wearing masks, giving the rescue team of 90 divers feeling hopeful. The boys, aged 11 to 16, and their 25-year-old coach have been trapped underground for more than two weeks. 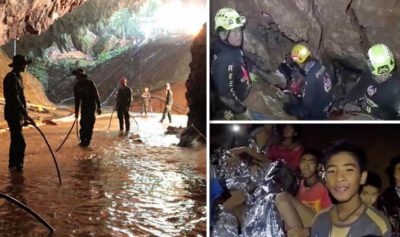