Fears about crossing the American border under the Trump administration’s travel ban has led to a Toronto-based Syrian children’s choir to turn down an opportunity to perform in Washington, D-C. 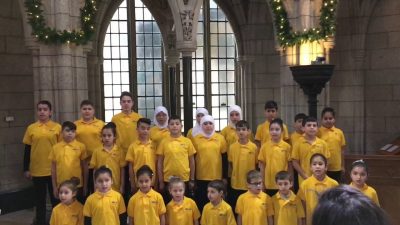 The general manager of the Nai Kids Choir says she worked with organizers of the Choral Festival to arrange for a pre-recorded video of the choir’s performance to be shown instead. Most of the choir members immigrated to Canada within the last two years, and some parents worried that travel documents from their home country would raise red flags under a U.S. policy that bans travellers from five majority-Muslim countries.

The choir is meant to be a therapeutic way for the children to learn Canada’s official languages through song, and choir leaders didn’t want to risk re-traumatizing them if U.S. officials denied them entry.