DOUG FORD TO HYDRO ONE "YOU'RE FIRED" IF I WIN ELECTION

Doug Ford announced Thursday that his first act as premier would be to fire the CEO and the entire board of Hydro One. 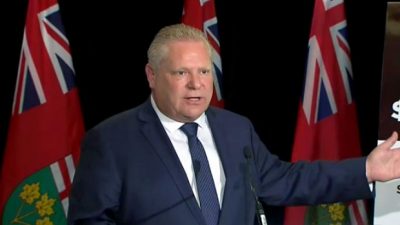 The PC leader called the company’s CEO “Kathleen Wynn’s 6 million dollar man” referring to his yearly salary and bonuses that add up to 6.2 million dollars. Ford says some Ontario families and seniors are forced to choose between heating and eating while the CEO of Hydro One was given a 1.7 million dollar bonus. It’s not yet clear how he’d do that since the province doesn’t control the company anymore but Ford says details will come later in the campaign.  Hydro One has responded to the PC leader’s announcement. In a statement the regulator says 80 percent of the total executive compensation package is paid by shareholders.