Ontario’s Progressive Conservative party is giving members even more time to sign up to cast their vote for a new leader. The party has already extended the voter registration deadline once, pushing it back from March 2 to March 5. It now says voters can sign up until 8 p.m. on Wednesday, March 7. Voting to choose the new leader got underway Friday and closes March 8th, with result announced on Saturday, March 10. The party is in the midst of a leadership contest to replace Patrick Brown who resigned last month amid sexual misconduct allegations. The former PC leader vehemently denies the allegations and briefly re-entered the race to reclaim his old job, but pulled out saying the race was taking a toll on his friends and family. Four candidates currently vying for the top job are Christine Elliott, Caroline Mulroney, Doug Ford and Tanya Granic Allen. 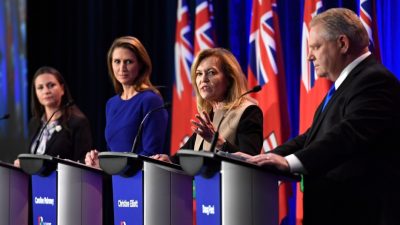