Despite recent turmoil within Ontario’s PC party, a new poll says half of Ontario voters would vote for the Progressive Conservatives. The latest Forum poll shows support for the party is up 8 points since January. 49 percent of Ontario voters support the PC’s, 24 percent back the Liberals. The poll also found 22 percent of PC supporters think candidate Christine Elliott would be the best leader with Doug Ford, Caroline Mulroney, Patrick Brown and Tania Granic Allen trailing. All five are in the PC leadership race and the winner of the online voting will be announced March 10th. Meantime, Patrick Brown told supporters yesterday he’s feels he’s been vindicated after fighting to restore his reputation after sexual misconduct allegations. A defiant Brown officially launched his leadership bid yesterday to replace himself as leader of the PC’s. But not everyone is on board with Brown’s defence. CTV-the network to first report on the allegations-released a statement saying it stands by its reporting and welcomes the opportunity to defend its journalism in court. 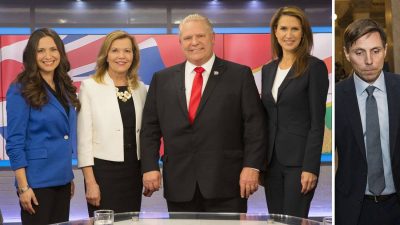 Meantime, in a TV interview to air Sunday, candidate Christine Elliott says Brown has done a lot to clear his name and is closing in on what needs to be done. Other candidates, Doug Ford and Caroline Mulroney however are taking a wait and see approach adding they’ll re-visit the idea of welcoming Brown back to the party once they’re elected leader.