A New York college says it has discovered a lock of George Washington’s hair pressed in the pages of an old book. 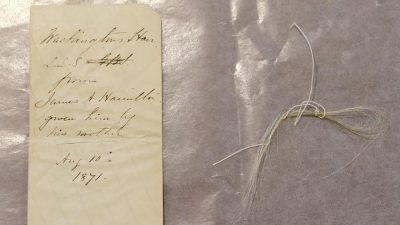 While officials at Union College in Schenectady can’t say for sure it’s the real deal, the historical evidence is there. Washington found renewed fame recently with thehit Broadway musical “Hamilton.” The head of special collections and archives at the college called the hair “a very significant treasure” that will eventually be displayed at the liberal arts school. There are no plans to put the hair through DNA testing, in part because it could destroy part of the lock.