Royal watchers are waiting to see if the Duchess of Cambridge will wear black to tomorrow night’s British Academy Film Awards.The red carpet is expected to be a sea of black as many female stars and guests show their solidarity with victims of sexual harassment and abuse.The royal family usually steers clear of political statements, but it could be awkward for Kate to ignore the gesture and wear bright colours. But if Kate shows up in any colour other than black, she’s likely to face huge criticism.The Duchess of Cambridge wore a black Alexander McQueen dress to last year’s awards. 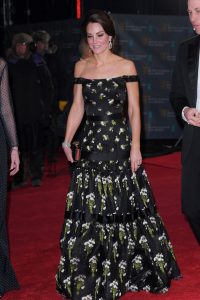