GRIDLOCK HITS TORONTONIANS IN THE WALLET 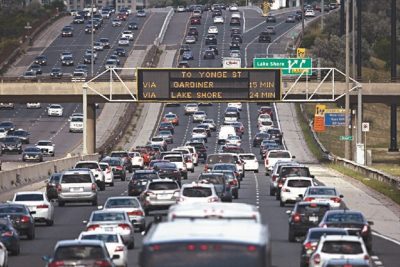 A report from Toronto’s Board of Trade says one million tonnes or $3 billion worth of goods are trucked along the Toronto to Waterloo corridor each day creating congestion and delays. The total cost of the problem is a staggering $650 million per year. The report makes a few recommendations including using smart traffic signals, clearing accidents quickly and opening up paved shoulders to vehicles during rush hour. Author Natasha Apollonova says there needs to be a coordinated strategy in the region. It also calls for a crack down on vehicles that block traffic by making illegal turns and suggests moving transport truck traffic to the highway 407 by offering financial incentives to trucking companies to use the toll road.