FRED ROGERS IS GETTING HIS OWN STAMP

The man known for his catch phrase “It’s a beautiful day in the neighborhood” is getting his own stamp. 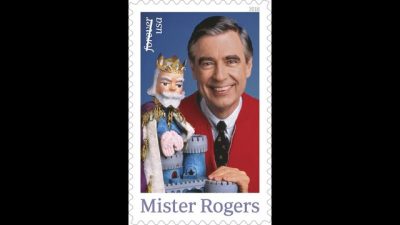 The U.S. Postal Service will issue the stamp featuring Mister Rogers, the former children’s television host known for his cardigan, sneakers and soothing manner. The Forever stamp will be unveiled in March in the same Pittsburgh public television station where “Mister Rogers’ Neighborhood” was produced. Rogers produced, wrote and hosted “Mister Rogers’ Neighborhood” for more than 30 years. He died in 2003 at 74 after battling stomach cancer. Throughout the years, he told viewers to love themselves and others.