ONTARIO LIBERALS MEET FOR DAY 2 OF CONVENTION IN TORONTO 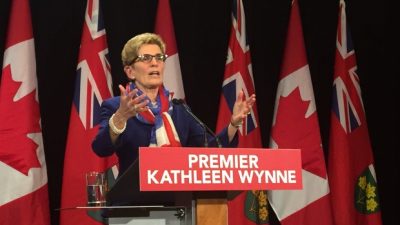 Premier Kathleen Wynne was expected to deliver a rally-style speech as her Liberal party held its annual convention.

Wynne opened the Ontario Liberal Convention Friday night by taking questions from party members. Wynne said she planned to focus he speech on uniting the party and campaign preparedness as Ontarians get set to head to the polls on June 7th.
The Premier said her speech would also focus on volunteer training and recruitment ahead of the general election.

Hours before her keynote address on Saturday, Wynne met with the Liberal Youth Caucus to discuss everything from education to employment.

Grey Cup-winning coach of the Toronto Argonauts, Marc Trestman, also delivered a keynote address to the Liberal crowd ahead of the premier’s big speech. Trestman talked about perseverance and the importance of mentoring and having a mentor.