The Prime Minister announced a mini cabinet shuffle today and the focus is on reconciliation with Aboriginal Peoples. Former federal Health Minister Jane Philpott will head a new Indigenous Services portfolio to work alongside Carolyn Bennett, whose new title is minister of Crown-Indigenous relations and northern affairs. 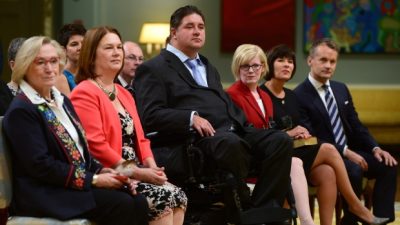 Carla Qualtrough moves from the Sport and Persons with Disabilities portfolio into Public Works and Procurement. That lands her right in the middle of the mess with the Phoenix pay system which has left many government employees either short of pay or not paid at all. Justin Trudeau has also appointed rookie New Brunswick M-P Ginette Petitpas Taylor to the health portfolio and Seamus O’Regan becomes Veterans Affairs minister. O’Regan assured Canadians he can perform his duties fully, despite a battle with alcoholism. He says he feels great and finds the stresses and strains of purposeful work invigorating.