The strike by ground workers at Canada’s busiest airports could soon be over. 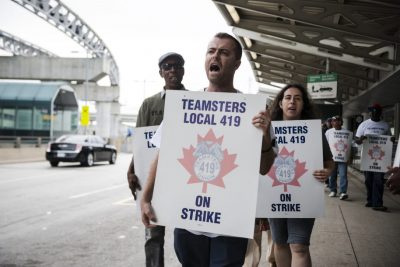 photo: Toronto Star
The union representing striking workers at Toronto’s Pearson airport says it received a new contract offer Monday that will be voted on Wednesday. About 700 baggage handlers, cabin cleaners, and other ground crew employed by Swissport have been on strike since late July. A union spokesman says the company extended the offer Monday night after a week of negotiations. The ground crew strike will end if the Swissport workers vote to approve the new deal. Details of the latest offer won’t be released until union members finish voting. Workers have complained of scheduling issues, a wage freeze, and a lack of respect from Swissport for their work. Swissport services several major airlines at the airport, including Air Transat, Sunwing, British Airways, and Air France.