Toronto police have unveiled a new design for their squad cars after an earlier version attracted mounting criticism over the colour scheme. The previous dark grey design sparked complaints that the cars weren’t as visible as current police cars and others said the cars looked like military vehicles. Police Chief Mark Saunders stopped the rollout of the cars in November and the force launched an online survey in April asking for the public’s help in redesigning the cars. The new two-toned cruisers revealed Monday are still partly dark grey but also feature white doors with large black text that says “Toronto Police.” The design makes the word police more visible than it was on the earlier cruiser design. The final design was created with help from Ryerson University’s RTA School of Media. 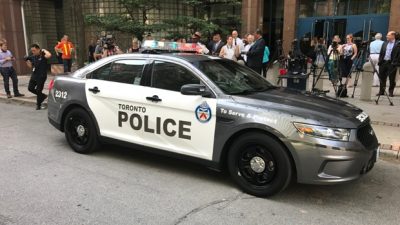