It was 75 years Saturday that Canada’s military suffered its bloodiest single day in the Second World War – the raid on Dieppe on August 19, 1942. More than half of the nearly five-thousand Canadians who took part in the ill-fated mission became casualties. 916 died on the shore of the northern coast of occupied France. A Canadian government delegation is in France to mark the anniversary, and ceremonies are being held Saturday in Montreal and Calgary and on Sunday in Dieppe, New Brunswick. The Prime Minister released a statement Saturday thanking all veterans, and those who gave their lives at Dieppe. Justin Trudeau says the loss taught Allied forces valuable lessons, which he says “they used to help turn the tide of the war on D-Day” less than two years later. In Toronto, the 96th annual Warriors’ Day Parade at the C-N-E was held Saturday, and remembered both the 75th anniversary of Dieppe and the 100th anniversary of the battle of Vimy Ridge. 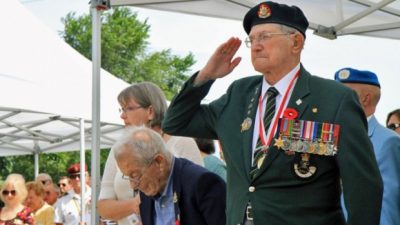