U-S President Donald Trump today condemned hate groups by name, something he failed to do on Saturday after a violent weekend in Charlottesville, Virginia. During a television speech from the White House Monday, Trump says “racism is evil” and went on to say that the KKK, neo-Nazis and white supremacists are “criminals and thugs.” 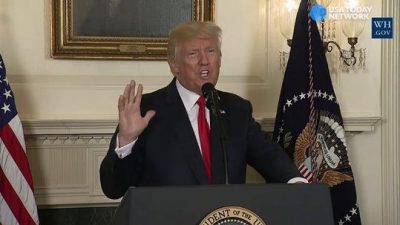 He made the comments after a meeting with the Attorney General and FBI Director about the race-fueled violence. Trump added that anyone who acted criminally in the weekend violence, will be held fully accountable. Even though Trump finally denounced the groups Monday, investigative filmmaker Martin Himmel told Zoomer Radio’s Fight Back with Libby Znaimer, that his initial weak response will embolden these groups to protest more in public, rather than hide in anonymity on the Internet. One woman was killed Saturday when a car plowed into a group of counter-protesters. A judge has denied bond for the accused driver, James Alex Fields Junior from Ohio, who is charged with second-degree murder and other counts.