VIGILS FOR VICTIMS OF CHARLOTTESVILLE

The mood in Charlottesville, Virginia today has shifted from anger and outrage to grief following yesterday’s protests. One woman was killed when a motorist rammed his car into a group of people. A 20-year-old white man has been charged with second-degree murder in the attack that also left at least 19 people injured. A civil rights investigation has now been launched into the incident. Reverend Jesse Jackson said it looks like U-S President Donald Trump’s campaign of hatred has caught up with Americans. U-S President Donald rump tweeted “there is no place for this kind of violence in America. Lets come together as one!” But he’sfacing criticism from both Republicans and Democrats for blaming “many sides” for the violent clashes and not naming the hate groups by name. Two Virginia state troopers also died when their monitoring helicopter crashed just outside Charlottesville. On Saturday, former KKK leader David Duke called the rallies “turning point” saying that protesters would fulfill the promises of Donald Trump’s candidacy. 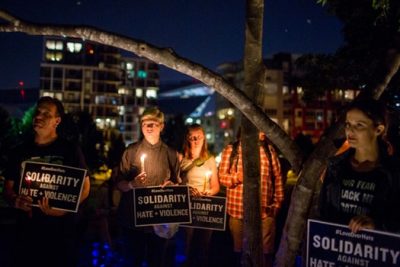