A man who lived through both world wars and survived the Holocaust has died in Israel just a month before his 114th birthday. 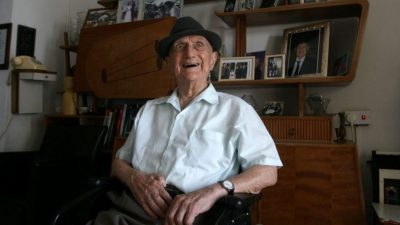 Israel Kristal was born in Poland in 1903 and was awarded a Guinness World Records certificate as the world’s oldest man last year.He was sent to Auschwitz and other Nazi concentration camps during the second world war. Despite losing his first wife and two children in the Holocaust, his daughter says he always saw only light and good in everything. Last year, Kristal says he didn’t know why he lived so long. Kristal didn’t speak much about his experience in the Holocaust. In a rare interview with Haaretz a few years ago, he said “Two books could be written about a single day there.” In light of Kristal’s passing, Guinness World Records will review other candidates for title of oldest man in the world and will announce the new title holder.