The Toronto Zoo remains closed to visitors this holiday weekend as efforts to end a week-long strike broke down Saturday with each side blaming the other for the lack of progress. 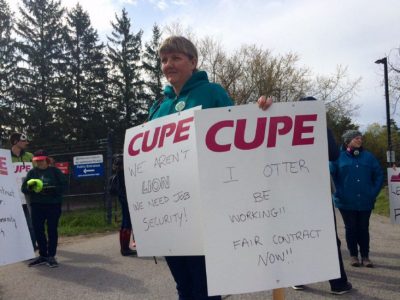 photo: Toronto Star
The zoo issued a statement saying the workers represented by the Canadian Union of Public Employees have rejected a reasonable compromise. CUPE says management won’t justify why they want to make changes to contract language that protects necessary staffing levels. The zoo statement says the compromise would have preserved current job security levels for all existing employees. No new talks are scheduled. More than 400 employees walked off the job earlier this month, forcing the zoo to close to the public. Toronto Zoo spokesperson Jennifer Tracey says the animals are being well cared for by management. Zookeeper and union spokesperson Christine McKenzie is concerned the current and future conservation programs are in jeopardy.