GEORGIA O'KEEFFE EXHIBIT AT AGO

Georgia O’Keeffe remains one of the most significant painters of our time. Yet there are still many assumptions about the work of this trailblazing American artist. A new O’Keeffe exhibit at the Art Gallery of Ontario opens Saturday, April 22 featuring 80 works spanning six decades. O’Keeffe is known for her large scale flower paintings but she actually hated flowers. She painted them because they were cheaper than models and they didn’t move. AGO interpretive planner Gillian McIntyre says flowers made up just 10 percent of O’Keeffe’s work- the rest depict landscapes, skyscrapers and bones. Many have speculated over the years that her flower paintings depict female body parts but O’Keeffe flat out rejects the theory. 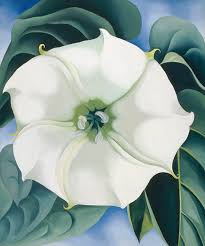 A fierce feminist, O’Keeffe despised the moniker “best female artist” preferring to be called “best artist.” She once commented that the courage to be a painter is like walking on the edge of a knife, and if you fall off it doesn’t matter as long as you love what you’re doing. Despite failing vision from macular degeneration, O’Keeffe continued to paint until her death at 98 in 1986. This exhibit at the AGO is the only stop in North America. It debuted last July at the Tate Modern in London to critical acclaim.