A Toronto family is looking for answers after their 86 year old father was badly beaten allegedly by another resident over the weekend. 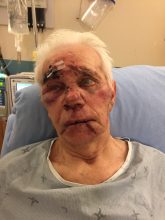 Acker was taken to a local hospital, but staff did not follow up with the family until Monday, according to his daughter. He suffers from Dementia, and has no clear recollection of the attack, but his family says he is reliving parts of the attack at times.

No word on any charges, or suspects at this time.

The family says this isn’t the first time Acker has been attacked. He was allegedly sexually assaulted by a female resident 6 months ago.  In response, the family says a stop sign and black tape was set up outside Acker’s room to stop residents from entering the room.

Tammy Carbino, Acker’s daughter was a guest on Fight Back with Libby Znaimer on Wednesday alongside CARP’s Wanda Morris. You can hear that interview here.

Zoomer Radio has attempted to contact St. Joseph Villa’s Administrator David Bakker, and Health and Long Term Care Minister Dr. Eric Hoskins but no statement has been given at this time.

The news comes on the heels of manslaughter charges being laid against a resident of a nursing home in Mississauga who is accused of beating a fellow resident to death in November.