Hundreds of thousands of people turned out yesterday in support of the Women’s March on Washington. In the U-S capital, organizers say more than half a million people filled the National Mall. Globally, the total number of demonstrators exceeded a million. In cities across Canada and around the world protesters took to the streets in a show of solidarity. Toronto police now estimate Saturday’s crowd at the Toronto march exceeded 10,000. The marches were organized to coincide with Donald Trump’s inauguration. Trump has retreated on an early morning tweet Sunday that seemed to criticize Saturday’s protests. The new American president initially tweeted he was “under the impression that we just had an election!” — adding “Why didn’t these people vote?”Less than two hours later, Trump issued another tweet calling the peaceful protests a part of American democracy and that he recognize the rights of people to express their views. The Trump Administration spent its first full day in office taking shots at the media and arguing about crowd sizes at Friday’s inauguration. 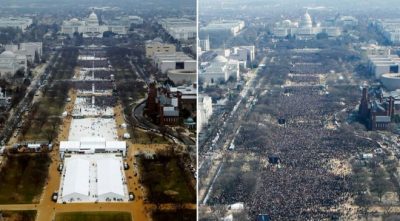 Trump’s inauguration (left) and Obama’s in 2009, viewed from the Washington Monument
photo: Reuters

Also on day one of the Trump presidency, Press Secretary Sean Spicer blasted the media during his first press conference claiming that reporters had engaged in “deliberately false reporting” in the past 24 hours since President Trump took the oath of office. He went on to say, “Photographs of the inaugural proceedings were intentionally framed in a way, in one particular tweet, to minimize the enormous support that had gathered on the National Mall.”