Donald J. Trump is now officially president of the most powerful nation on Earth. Trump placed his hand on two Bibles, one used by his family and another used for President Abraham Lincoln’s inauguration, and at the age of 70 became the oldest person to be sworn in as U-S president. Light rain was falling as Trump gave a thumbs-up signal and began his inaugural address. He told the cheering crowd that January 20th, 2017 will be remembered as the day the American people became the rulers of their nation once again. In his speech, he vowed to fight for Americans “with every breath in my body” and to never let them down. He added, “We will follow two simple rules: Buy American and hire American.” Before he left the White House, Barack Obama took a final stroll from the Oval Office through the Rose Garden. Obama followed tradition and left a letter in the Oval Office for his successor but the White House isn’t saying what was in it.Obama told reporters he was feeling nostalgic on his final day as president and on Twitter sent out a final message, telling Americans quote — “It’s been the honor of my life to serve you.” 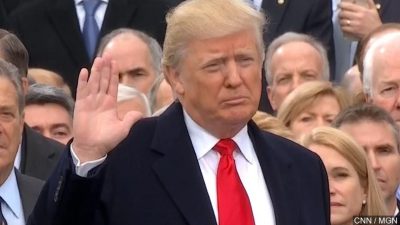