The world’s oldest living person has marked her 117th birthday. 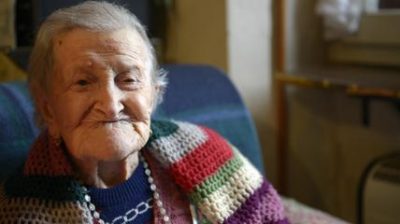 Emma Morano of Italy was born 117 years year ago today, on 29 November 1899 and is believed to be the last person living who was born in 19th century. The Zoomer celebrated in her home where she receives 24-hour care. She received a greeting from her country’s president which was read to her by a spokesperson. She also had a visit from two elderly nieces and her long-time physician to mark the milestone birthday. She patiently responded to a series of questions from journalists and accepted some gifts, including cookies. Then she blew out the candles on her cake not one for every year, but three numerals to show her age, 117. Another party, including cake, was planned for the afternoon, after a nap. Guinness World Records confirmed Emma as the Oldest person living in May, after reviewing research. A spokesman said she can teach us all a lesson of the value of a life well lived.