Oakville’s James Hinchcliffe will start sixth in today’s Honda Indy after finishing his qualifying in 1:01.5637. Scott Dixon has taken the pole position. He’s a two-time winner of the event after capturing both legs of the race in 2013. It’s his 24th career pole. In Saturday’s qualifying races, Helio Castroneves earned the second pole position while Simon Pagenaud will start third in today’s race. Will Power will start fourth and Sebastien Bourdais fifth. Hinchcliffe just squeaked into the second round of qualifications by six hundredths of a second, completing his best lap in 1:00.6291. He once again edged into the third round in 1:00.4584. Streetcars and buses routes in the area have been running on modified routes since 2 a.m. on Thursday. Lakeshore Boulevard West between Strachan Ave and Ontario Dr, has been closed off and re-opens Sunday at midnight. 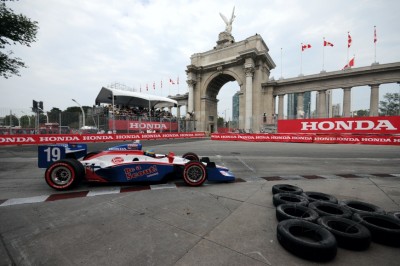