The Toronto-bred rapper made his return to the show Saturday night, again pulling double duty as both host and musical guest, as he did in his first SNL gig in Jan. 2014.

It was a Drake-filled 90 minutes with two music segments and a bunch of sketches where he showed off his considerable comedy chops.

There were, of course, references to Canada, including a monologue joke about Americans fleeing north, frightened by the prospect of a Donald Trump presidency.

In a ‘Black Jeopardy’ sketch Drake played a Canadian contestant who baffles the show’s quiz master with answers referencing such can-con as the Junos, rapper Kardinal Offishal and NHL’er Jaromir Jager.

He added a couple of music video spoofs, including one where he raps plaintively about being the punchline of social media gags.

And while Drake’s unorthodox dancing in his ‘Hotline Bling’ video was ruthlessly parodied by SNL last fall, the ribbing didn’t stop him from busting some moves last night while performing his song ‘One Dance.’

The tune is on Drake’s latest album ‘Views,’ which is on track to debut at No. 1 on the May 21-dated Billboard 200 chart. 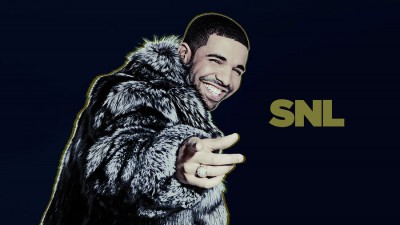