An electrician and his wife are on trial, accused of hiding 271 stolen works by Pablo Picasso for decades. In a high profile trial in France, prosecutors are seeking a five-year suspended sentence for Pierre Le Guennec and his wife, Danielle. The couple could be ordered to pay damages when the verdict comes down March 20th. The Le Guennecs claims Picasso or his wife gave them the works, which include lithographs, collages, paintings and drawings, around 1970. 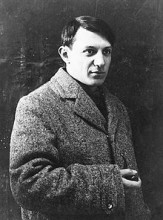 It’s estimated the art, which has never been displayed publicly,  could be worth between 68 to 113 million dollars.