MERKEL TO VISIT HARPER AHEAD OF "UKRAINE SUMMIT"

It’s expected that Prime Minister Stephen Harper will meet with German Chancellor Angela Merkel, this week, ahead of a “Ukraine Summit” called by leaders from Germany, France, Russia and Ukraine. 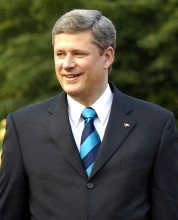 The talks will take place in the Belarusian capital of Minsk, Merkel’s supper hour arrival in Ottawa will allow the Prime Minister to receive a private briefing on a push to end the continued fighting in eastern Ukraine.

Ukraine’s military has been battling Russian-backed separatists since April in a conflict that the United Nations says has killed 5,300, a figure that has spiked in recent weeks.

Amid reports that the U.S. is considering arming Ukraine forces, which France and Germany oppose, the German leader will be in Washington to meet with U.S. President Barack Obama as well, this week.