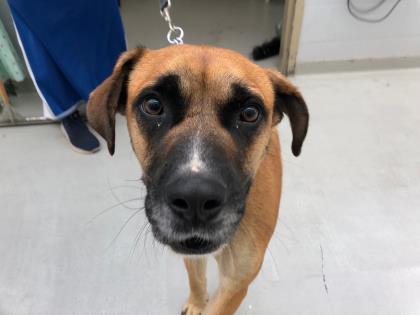 Ricky Bobby has recently developed a nickname while in our care – the tornado. He’s super fast and he’s sort of clumsy and knocks things down while he’s passing by. He doesn’t really mean to do it; he just doesn’t know the power of his own strength.

But when it comes down to it, Ricky Bobby is an incredibly gentle guy who simply adores his people. He will nibble treats out of anyone’s hands who’ is offering. He loves rubs – not pats please, there is a difference – and he’s a hugger. A BIG BOY hugger.

He is also an energetic, playful boy who also loves to pounce on any kind of toy and chew them – balls, ropes, squeakers, and tug-o-war if you’d like to play too. When he gets very excited, his has a little wiggly butt that will make you smile.

With a whole lot of energy to burn, Ricky Bobby is big on outdoor adventures. Hikes, exploring around bodies of water, and spending hours surrounded by forestry is his idea of a fun time. Walking around the city, on the other hand, is not so fun. The loud noises, flashing lights, and crowds is a little overwhelming for Ricky Bobby. This guy feels more relaxed outside of the concrete jungle where he can enjoy the open space when he gets the zoomies.

Do you know what else is scary? New things. He will bark at scary things, like other dogs, strangers, the self moving vacuum, until they go away. But with positive association, he is learning that new isn’t too bad and he’s working on adding more friends to his friend circle.

Like everyone else starting the new year, Ricky Bobby has set some self-care, training resolutions. First, he’d like to improve on his walks. He gets a little too excited when he sees other dogs and doesn’t know how to contain his feelings other than by going up to them. Because he’s a big boy, which he forgets sometimes, he needs to keep his cool.

His second resolution is to work on sharing. We don’t know too much about Ricky Bobby’s history before he came into our care, but he doesn’t like to share his food. He’s cool with sharing toys, but not his food. This is something that can be worked on – and since he comes with post-adoption support, our trainers will be happy to help set him, and you, up for success as he works on his new goals.

Ricky Bobby would do best in a quiet area, possibly outside of the city, with a guardian who is patient and willing to work with him through positive reinforcement training. Once he’s comfortable, he has tons of big boy love to spread around! He just needs a little structure, patience, and training and he will be your best friend forever.

**If you are interested in adopting this dog, please fill out our fast-track adoption questionnaire by copying and pasting this link: https://forms.office.com/r/NQVdWUSSMs

Think you’re the one? Begin our adoption process here! adopt-a-pet/adoption-process