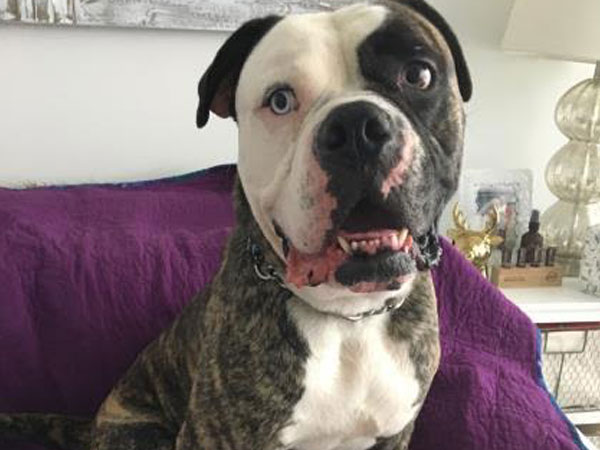 Murphy’s a sweet silly goofball and he’s got plans! First, he’s gonna give you a big slobbery kiss, then he’s gonna grab his toy and you’ll chase him! No way you can catch HIM! Then he’s gonna jump on the couch, then run over here, then there, and then you’ll play tug with him until it’s time for another big kiss! Muah!

Despite being completely deaf, Murphy is the happiest, friendliest, most fun-loving goofball around! All he wants to do is spend the day outside wrestling with his buddies. He loves rolling around on the grass until he gets dizzy and then finding someone who’ll chase him! And after a day of romping and rolling, he turns into a real love bug, looking for a lap to rest his big silly head on. Oh, and did we mention that he has a way with the ladies? Or, at least he thinks he does. He loves flirting with his female counterparts every chance he gets!

Believe it or not, there are some things Murphy DOESN’T like. Small dogs, for example. What the heck is up with those guys?! How come they’re so small? He also doesn’t like being left alone! Because he can’t hear anybody, Murphy can often feel very vulnerable, especially when there aren’t any people or doggie pals around to keep him company. He can express his fear by barking loudly, growling and snapping. He’s really sorry about all that! He knows he needs to work on these behaviours and he’s made huge progress since being with us.

The poor guy is still adjusting to his hearing loss. He doesn’t understand why he can see you without being able to hear you. He really misses the sounds of happy human voices and the barks of other doggies. Having lost all of that, he sometimes feels restless, anxious, and even frustrated with himself. He hopes to find a family that’ll stick by his side and show him everything’s going to be okay.

He’d prefer to be in an adult only home with no small dogs or children. If there are other larger dogs or cats in the home, he would love meeting them here first! He’d like there to be someone at home with him during the day, at least for the first few months of him being in his new home!

Above all, Murphy hopes to find a family who will help him get his confidence back and improve his behaviour. He knows he has a lot of work to do, and can’t wait to find that’ll help him through his anxieties.

If you’re interested in being a part of Murphy’s journey, please reach out to us at [email protected].