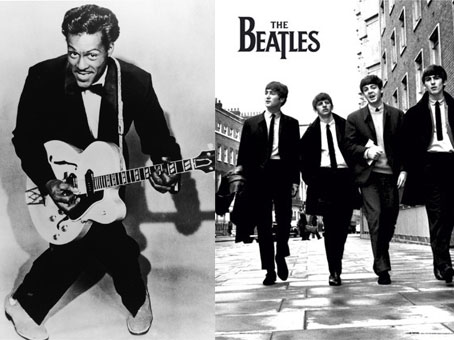 One of the most important aspects of coming up with a single that will be successful and quickly climb to the top of the charts, is having great lyrics accompanied by a catchy melody. Sometimes a single is so successful that artists will use it again, tweaking it slightly to create a new No.1 hit. But what happens when a different artist takes a melody that another musician worked so hard to create? Here are some popular examples of songs that have been ripped-off by other artists. Can you think of any more examples?

It is no surprise that a single by Chuck Berry caught the attention of the Beach Boys. Berry was known one of the pioneers of rock and roll music. Instead of taking just snippets of the tune, the Beach Boys copied the entire track without the proper credit given to Chuck Berry.

[2] Original: He’s So Fine by The Chiffons
Rip-Off: My Sweet Lord by George Harrison

He’s So Fine is a hit single performed by the female group The Chiffons. The song topped the US singles chart for four weeks in the spring of 1963. In 1970, former Beatle George Harrison released his first solo album releasing his single My Sweet Lord. In February of 1971, Bright Tunes Music filed suit against George Harrison, alleging musical plagiarism. The case went to court and the trial became a highly talked about, and reported, issue. The Bright Tunes Music v. Harrisongs Music case is one of the biggest plagiarism trials in the history of music. To listen to My Sweet Lord by George Harrison click HERE.

[3] Original: You Can’t Catch Me by Chuck Berry
Rip-Off: Come Together by The Beatles

Seems Chuck Berry’s songs catch the ear of many well-know artists. In 1973, The Beatles were sued by Big Seven Music Corp which handled Chuck Berry’s “You Can’t Catch Me”. They claimed that not only was the beat from “Come Together” just Berry’s song slowed down, the lyrics were also stolen. The two different songs and their lyrics are John Lennon’s “Here come ol’ flattop, he come groovin’ up slowly” to Berry’s “Here come a flattop, he was movin’ up with me”. To hear Come Together by The Beatles click HERE.