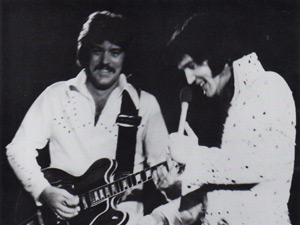 Rhythm guitarist John Wilkinson died on Friday January 11th at the age of 67. Wilkinson had played over one thousand shows with Elvis Presley as a member of the TCB Band.

He joined Presley’s backing band at the age of 23 after Presley saw him play on a television show in 1968.

Wilkinson passed away in his home in Springfield, Missouri after a long battle with cancer.

Priscilla and Lisa Marie Presley sent their condolences to Wilkinson’s family and said in a statement: “John and the beautiful music he made with Elvis will live forever in our hearts.”