Did Your Prom Outfit Compare To This? 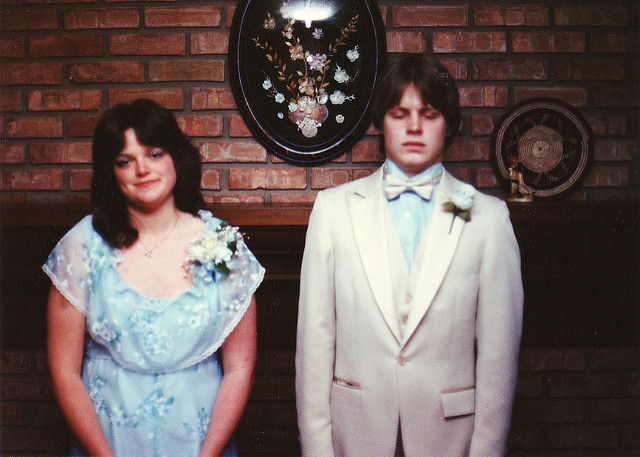 Before you start jumping on the “she should seek counseling” train, consider for a second that what you’re about to read might not indicate some kind of cry for help, but rather an ingenious expression of identity.

See, I wasn’t “lucky” enough to go through the youthful evisceration known as “Prom”. At the end of Grade 12, when everyone else was fretting and stressing about getting this rite of passage down just right – because, as we all learned in hindsight, Prom has an enormous impact on your future – I had just accepted my first full-time job in radio. I’d been planning, as so many of us did, on returning for Grade 13, but getting my dream job at the end of Grade 12 kinda changed that plan, and so Prom was never even an option.

If I had gone, I probably would have found some way to incorporate my dream gig into my attire for the event – whether that meant some kind of Wolfman Jack / Venus Flytrap look, or even just a microphone lapel pin.  Because when I was at the age to be considering my Prom outfit, I lacked the creativity that we saw from 17 year-old Megan Flaherty from Pennsauken High School in New Jersey, who showed up for her Prom with a nod to her ambitions, and her future career.

Megan wants to be a funeral director.

Megan showed up in a coffin.

While I’d be surprised to find that anybody arrived at your Prom in a hearse, we all know that person who did that thing.  Maybe that person was even you.  Was it?  Spill!