Selling Something on eBay? Watch for this scam. 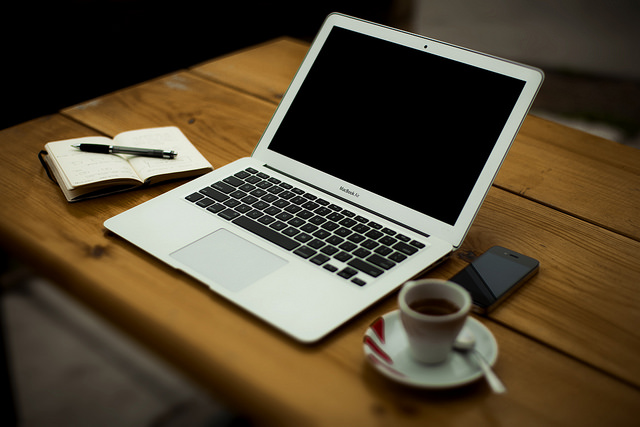 So I’m a bit of a techno-geek. Always looking for the latest upgrade, the shiny new thing, the app or gadget that’s gonna make my life a little easier or make me more efficient. As a result, I have a pile of old tech gadgets that were just taking up space, and I’ve decided to part with some of them.

Over the weekend, I put an old smartphone up for bid on eBay. I hadn’t used eBay in a few years, so had to create a brand new account and spend some time re-learning how stuff works.

The other thing I learned: The scammers have evolved.

I’ve included screenshots of my exchanges with this particular scammer, but let me set it up for you.  There’s also some advice even further down the page about what to look for – in case email sleuthery isn’t really your thing – to avoid being scammed yourself.

So I get a message on eBay about my phone, a user tells me they’ve got questions about the phone and would like me to text them some info; then they provide their phone number.

You can see, from the following exchange, where things started to go awry.  I blacked out the stuff you don’t need to know, but rest assured, the police are getting the whole enchilada.

So if you followed that whole thread, you see that I already had my doubts when they asked for the eBay link in the first place; but when they said they’d sent money – outside of eBay – and it wasn’t showing up in my PayPal balance, that raised even more alarm bells.

eBay’s system is set up the way it is for a reason – that reason is to protect both buyers and sellers from scams like this.

The email they’re talking about DID show up, by the way.  It looked like this (click on the image to see it full-size): 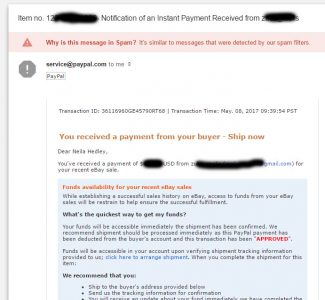 Notice where it greets me as “Neila Hedley”?  I smell a rat.

And not only that, look at the line that starts with the “Transaction ID”. It says the Transaction Time was 09:39:54 PST… except the conversation wasn’t happening on the west coast – it was happening at 9 in the morning eastern time.  Another rat.

If you ever get emails that seem… odd to you, try this. See this part of the email? 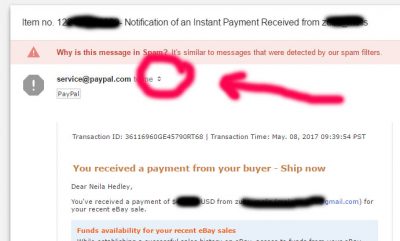 Click the little arrows to the right of what the email address claims to be.  Then you’ll see the address it actually came from:

It was when I checked the actual email address that the text message conversation turned permanently.

The most hilarious part for me, though – and I’m sure for law enforcement as well – is that if you look at the original fake email, you see where it says, “We recommend that you ship to the buyer’s address provided below.”

It’s a house in Massachusetts.

Turns out I lied to them about something.  It wasn’t actually a very “good try” at all.  Especially not if their intended victim knows what to look for.