‘Doo Wop’ music! I must admit the first time I heard that term back in the late 1960s when I started collecting records, I was mystified – and uncomfortable. I was going to Oakwood Collegiate, then in a mostly Italian neighbourhood, and many of my pals were Italian. That music term just didn’t sound right. After I worked up the courage to ask someone about ‘doo wop’, I was relieved, and fascinated. The term refers to a certain kind of vocal harmony group singing, identified by distinct parts for bass and for tenor. Its mythology intrigued me – I’d never actually seen young guys standing around a street corner singing away; I guess I hadn’t lived enough.

But that was it – street corner singing without instruments – a cappella (‘as in church’), and it had been around for years. It was first perfected by The Mills Brothers and then by The Ink Spots, during the 1930s and 40s. That street-corner singing scene evolved in the post-war years in larger American inner cities. These young guys were raw talents with dreams of being heard and appreciated. They were easily exploited by the music industry, promising them a recording session and paying them a few bucks. They’d walk proudly with their brand new record, became neighborhood heroes for awhile, and most faded away, as other, newer, singers went through the same grind.

Some of their recordings became hits, with the record label making the profits. A few groups got to make follow-up recordings, and a very rare breed – usually well-managed, highly talented, and maybe luckier – became legends. As time passed, and music changed, there was a nostalgic yearning for an earlier time, when ‘rock and roll was new’. Some people – like me – started collecting the old records, and the more we learned about the past, the hungrier we got for the rarer, more obscure, songs. Many of the rarest were on those tiny independent record labels of the 1950s – very hard to find, thus making them all the more desired. 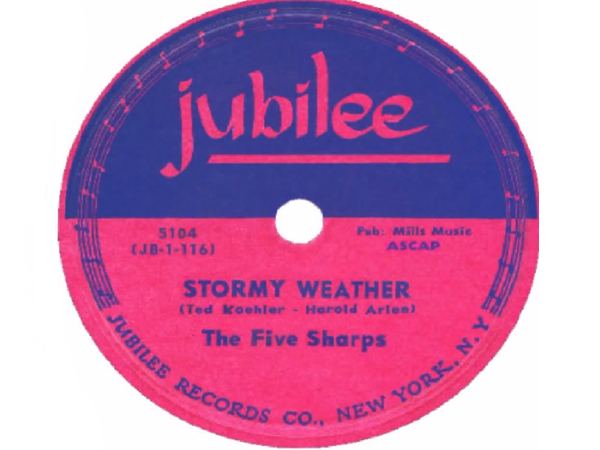 Perhaps the most ‘mythic’ of all – the so-called ‘Holy Grail’ of collecting – was a doo wop song from 1952 called ‘Stormy Weather’ by The Five Sharps. It was a cover of the classic Lena Horne song. It really wasn’t a very good version, and it certainly wasn’t a hit. What made The Five Sharps’ song so famous, was its rarity. As the legend goes, the New York quintet were paid for their recording in hot dogs and pop; they even had to buy copies of their own record. It was a flop. Then in 1961 a record collector loaned his copy of ‘Stormy Weather’ to a New York DJ, who aired it one day, but while in his care, the record was broken. The DJ was also the owner of Times Square Records, and he assured the collector he’d replace the copy. But he couldn’t find one, and the recording studio revealed there had been a fire that destroyed all the masters.

The search was on; the record store owner offered a reward to anyone who’d bring in a copy – no one did – the reward went higher, and the legend grew. Only 3 copies showed up in 15 years of searches – only one was in very good condition, According to a 2005 story in the New York Daily News, the owner of one of the better copies, with only a hairline crack, auctioned it on eBay in 2003, and after some 9000 hits, sold it for $19,000. Most of today’s available copies (on vinyl, CD, or on-line) of ‘Stormy Weather’, the 1952 recording by The Five Sharps, were duplicated from that one good copy. I will play that rare song as part of my ‘Doo Wop Edition’ on this Sunday’s ‘Vintage Favourites’ – along with some of the genre’s most famous and most loved classics.