Frank Proctor Shares The Rest of the Story – Fight Night! 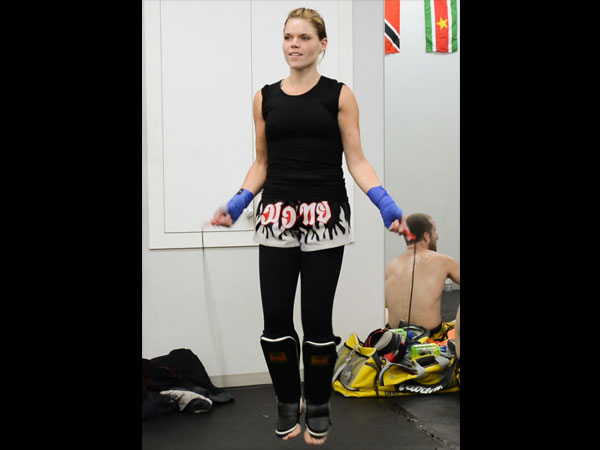 So where was I when I last blogged? Oh, yes, anxiously awaiting the Saturday night of my daughter-in-law’s first fight in the martial art of Muay Thai. To refresh just a bit, this has been an eventful year for Kaite. She had stomach surgery that enabled her, by careful dieting, to lose over 120 pounds. A few months ago she discovered this martial art and this past Saturday was the big night.

So, Shirley, my lady, made her way downtown from the farm we live on in the Newmarket area to join me in cheering Kaite on. Knowing there were several bouts to watch that evening, we decided to have a bite to eat prior to go to the gym and settled on a great little Sushi Restaurant at the corner of Queens Quay and Dan Leckie Way. Iruka Sushi and Sashimi on Lakeshore. I highly recommend it by the way.

After dinner we walked a few blocks further east to the Ayothaya gym where all the fighters and their fans were gathering. That’s when we found out that there would be 12 bouts that evening with Kaite listed second to last! I knew I could handle that much physical and sometimes brutal action but I wasn’t sure about Shirley. But, nope, when I asked her if she was going to be okay she said “Hey, I’ve never seen this sport before and I’m kind of curious.” Well trooper that she is, she hung in there. I should clarify the fights were demonstration in nature meaning that they were designed to give the fighters a chance to exhibit their strengths and abilities with no actual winner being declared at the end of the fight. But I’m here to tell you that real punches and real kicks were thrown and landed.
After watching 10 bouts, we, her Mom and several friends were getting quite nervous. We could see her opponent warming up and man she looked tough; quite a bit shorter
than Kaite but obviously more experienced. How did our gal do? Three gruelling two minute rounds with no knockdowns, many hard punches and kicks thrown and landed and at the final bell everybody in the gym on their feet cheering both fighters. One of the most impressive things of the evening was the respect that all the athletes showed to one another; hugs and pats on the back for a great effort.

Thanks to all for a great night at the fights!

This Week on Theatre of the Mind: September 27th - October 1st